678.ru — a service of search, not an online store. We will find the watches at the best price, and help them buy.

Search service optimal offers
of the original Swiss watches since 2004 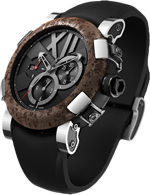 The makers of fine watches are always vying with each other to see who can make the most unusual, attention-grabbing luxury timepiece. This has produced watches with strange appearance, novel function and ingenious materials. It was only to be expected that someday this quest would yield something truly out of this world.

Now all the other watchmakers need to move out of the way and make room for Romain Jerome Watches, a company that has literally gone off the planet and to the bottom of the ocean in the search for new materials.

The idea is not entirely new. Other watchmakers have made historical commemorative watches using actual materials recovered from famous places. However, Romain Jerome Watches certainly deserves recognition for going further and trying harder than anybody else. For instance, the Titanic DNA series is composed of watches made from actual rusted steel taken from the wreck of the Titanic. Don't worry- each luxury timepiece has been chemically stabilized to keep it from decaying any further. Small amounts of other substances taken from the wreck have also been used in these Romain Jerome watches, such as coal from the engine room for the black dials. These creations from Romain Jerome Watches are chronographs with counter dials at 3 and 6, while a small second hand is at 9. Some models have Arabic numerals, but on others only the Roman numeral XII appears on the face, oversized and seemingly wedged between two angular pieces of metal.

Every luxury timepiece of the Titanic DNA series has a dark, brooding look, which can be partially explained by the fact that we know what happened to this doomed ship. However, there is much to be said for the deliberately dark, bulky look of the watches, which perfectly captures the grim event they are commemorating.

That line is certainly impressive, but Romain Jerome Watches proceeded to outdo themselves by using moon dust and materials from the Apollo 11 spacecraft for their Moon Dust DNA series. The dial of each luxury timepiece in this line is pocked with craters containing moondust brought back by astronauts in 1969. The cases are made from steel taken from the Apollo 11 spacecraft, while fibers from a spacesuit worn during an ISS mission were used in the strap. One of the craters on the dial is a small second hand.

In honor of the moon landing in 1969, only 1969 of these pieces were made. Other sources may tell you that these Romain Jerome watches have already left the planet, but we still have them.

X
Selected watches
You can:
European retail - retail price set by the manufacturer in the European Union. Send request!